Posted on December 9, 2020 by Administrator1

Editor’s Note: To ease navigation through this site, here is a year-by-year, chronological table of contents for our stories and texts from the Second Vatican Council. If this is your first visit to “Vatican II: 50 years ago today,” make sure to visit the About page for more details about our coverage of the council, which remains the most comprehensive record available of that historic event. END_OF_DOCUMENT_TOKEN_TO_BE_REPLACED

Posted in Vatican II | Comments Off on Table of Contents

At Simple Outdoor Mass Filled With Reminders of a Changing Church, Council Passes Into History

On Dec. 8 the Council Fathers gathered, without ceremony, in their regular council seats inside the basilica, vested in copes and miters — many of them wearing the simple gold rings Pope Paul had given them to commemorate the closing of the council instead of their customary jeweled rings.

Then they began the procession out the front door of the basilica, left across the portico, down the corridor of the Vatican’s formal entrance and out through the bronze doors into the square. Arriving at the altar and the papal throne area, they filled new banks of seats which had been set up for them.

Special delegations were given places of honor near the altar, while the diplomatic corps and other distinguished visitors were seated atop the great stone arcades that encircle St. Peter’s square. Thousands of other people were in the square itself. 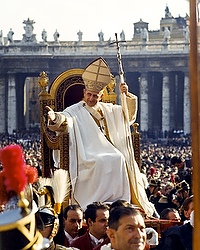 Pope Paul VI greets the faithful during the closure of the Second Vatican Council in St. Peter’s Square at the Vatican Dec. 8, 1965. (CNS/Catholic Press Photo)

Pope Paul celebrated Mass at an altar in the center of the assembled bishops, and all present recited the responses. At the end of the Mass, Pope Paul delivered a final discourse and then blessed a foundation stone which will be placed in the walls of a church to be built in commemoration of the council and to be dedicated to Mary, Mother of the Church.

Archbishop Pericle Felici, the council’s secretary general, read the official document proclaiming the closing of the council. Then bishops, special guests and thousands of priests, Brothers, nuns, seminarians and laity joined in responses to the prayers which followed. The Pope gave his apostolic blessing — and suddenly it was over. The Second Vatican Ecumenical Council was history.

Though history will colorlessly record that 2,400 council Fathers and as many theologians brought the council to a successful conclusion, more than 100,000 spectators will indelibly remember the pageantry of its close.

Enfolded by the massive arms of the colonnade which defines St. Peter’s Square, Romans and visitors from throughout the world stood under the pleasant winter sun which alternated with threatening but never-realized clouds of rain.

It was reminiscent of the opening ceremonies three years and two months before when the sun broke through clouds of drenching rain less than an hour before Pope John began this council. Much had happened since. END_OF_DOCUMENT_TOKEN_TO_BE_REPLACED

Posted in Vatican II | Comments Off on At Simple Outdoor Mass Filled With Reminders of a Changing Church, Council Passes Into History

The Second Vatican Council produced four constitutions, three declarations and nine decrees. To read the full texts of all 16 documents as posted on the Vatican’s website, click here.

Posted in Vatican II | Comments Off on Full Texts: Documents of the Second Vatican Council

In the four annual sessions of the Second Vatican Council the Church was enriched with four constitutions, nine decrees and three declarations.

The constitutions are those on the liturgy, the nature of the Church, divine revelation and the Church in the modern world.

The decrees are those on social communications, ecumenism, Eastern Catholic Churches, pastoral duties of bishops, renovation of the life of Religious men and women, seminaries, the lay apostolate, missions, and the priestly life and ministry.

The declarations are on the relations of the Church with non-Christian religions, Christian education and religious liberty.

Great dates of the council are as follows: END_OF_DOCUMENT_TOKEN_TO_BE_REPLACED

The Second Vatican Council has been summed up statistically by Vatican Radio:

END_OF_DOCUMENT_TOKEN_TO_BE_REPLACED

Posted in Vatican II | Comments Off on Council Statistics

These are translations of the messages issued at the closing of the ecumenical council Dec. 8 by Pope Paul VI to council Fathers and by various cardinals to different groups of people.

By Pope Paul to council Fathers

The hour for departure and separation has sounded. In a few moments you are about to leave the council assembly to go out to meet mankind and to bring the good news of the Gospel of Christ and of the renovation of His Church at which we have been working together for four years.

This is a unique moment, a moment of incomparable significance and riches. In this universal assembly, in this privileged point of time and space, there converge together the past, the present and the future—the past: for here, gathered in this spot, we have the Church of Christ with her tradition, her history, her councils, her doctors, her saints; the present: for we are taking leave of one another to go out toward the world of today with its miseries, its sufferings, its sins, but also with its prodigious accomplishments, its values, its virtues; and lastly the future is here in the urgent appeal of the peoples of the world for more justice, in their will for peace, in their conscious or unconscious thirst for a higher life, that life precisely which the Church of Christ can and wishes to give them.

We seem to hear from every corner of the world an immense and confused voice, the questions of all those who look toward the council and ask us anxiously: “Have you not a word for us?” For us rulers? For us intellectuals, workers, artists? And for us women? For us of the younger generation, for us the sick and the poor? END_OF_DOCUMENT_TOKEN_TO_BE_REPLACED

This is a translation of the speech delivered Dec. 8 by Pope Paul VI at the closing of the ecumenical council.

Your eminences, venerable brothers, representatives of governments, gentlemen of the city of Rome, authorities and citizens of the entire world! You, observers belonging to so many different Christian denominations, and you, faithful and sons here present, and you also scattered across the earth and united with us in faith and charity!

You will hear shortly, at the end of this holy Mass, a reading of some messages which, at the conclusion of its work, the ecumenical council is addressing to various categories of persons, intending to consider in them the countless forms in which human life finds expression. And you will also hear the reading of our official decree in which we declare terminated and closed the Second Vatican Ecumenical Council. This is a moment, a brief moment of greetings. Then, our voice will be silent. This council is completely terminated, this immense and extraordinary assembly is disbanded.

Hence, this greeting which we address to you has particular significance, which we take the liberty of pointing out to you, not to distract you from prayer, but to occupy the better your attention in this present celebration. END_OF_DOCUMENT_TOKEN_TO_BE_REPLACED

This is a translation of Pope Paul’s brief declaring the Second Vatican Council closed, read on Dec. 8 by Archbishop Pericle Felici, general secretary of the council.

To the perpetual memory of the event: The Second Vatican Ecumenical Council, assembled in the Holy Spirit and under protection of the Blessed Virgin Mary, whom we have declared Mother of the Church, and of St. Joseph, her glorious spouse, and of the Apostles SS. Peter and Paul, must be numbered without doubt among the greatest events of the Church. In fact it was the largest in the number of Fathers who came to the seat of Peter from every part of the world, even from those places where the hierarchy has been very recently established. It was the richest because of the questions which for four sessions have been discussed carefully and profoundly. And last of all it was the most opportune, because, bearing in mind the necessities of the present day, above all it sought to meet the pastoral needs and, nourishing the flame of charity, it has made a great effort to reach not only the Christians still separated from communion with the Holy See, but also the whole human family. END_OF_DOCUMENT_TOKEN_TO_BE_REPLACED

Posted on December 7, 2020 by Administrator1

This is a translation of Pope Paul VI’s apostolic constitution declaring the post-council jubilee, issued on Dec. 7.

A wondrous event to which the entire family of Catholics and even the whole of mankind turned their hearts and minds with increasing interest through these four years, namely the Second Vatican Council, has just ended. We believe that this event demands from us an equally momentous act which will not only leave on men’s minds a lasting memory of the magnificent assembly, so significant for the present as well as the future course of the Church, but also, and this is more important, will prepare the minds of the faithful to hold fast to the injunctions of this most holy synod. END_OF_DOCUMENT_TOKEN_TO_BE_REPLACED

Posted in Vatican II | Comments Off on Text: Pope’s Apostolic Constitution Declaring a Jubilee to Celebrate Completion of Council

Posted on December 7, 2020 by Administrator1

This is a translation of the address delivered Dec. 7 by Pope Paul VI to members of the special missions sent by more than 80 countries to the close of the ecumenical council. The audience was held in the Sistine Chapel.

Your Excellencies, members of the extraordinary missions:

This incomparable sanctuary of art and piety, which for almost half a millennium has received the most varied audience, today is witness, thanks to you, to a spectacle of rare breadth and unusually significant character.

While the Second Vatican Ecumenical Council draws to a close more than 80 countries have delegated highly qualified people to be present at the closing ceremonies, and to testify by their presence to the interest they have in this event and to the importance they attribute to it.

And still one might think: Why would the world’s political opinion, even on its noblest and highest plane, be interested in a council? END_OF_DOCUMENT_TOKEN_TO_BE_REPLACED